NASA ENGINEER WINNER OF THE WRENCH BUILD OFF - press release 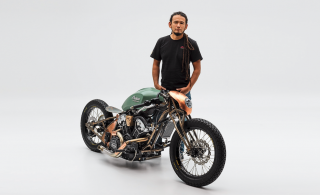 “I cannot thank Indian Motorcycle enough for the opportunity. Not only was this a once-in-a-lifetime experience, but the three-month build period created an incredible bonding experience for me and my family,” said Juarez. “And of course, thanks to all the fans who took the time to cast their vote. I know it wasn’t easy to pick one because the other two bikes are incredible. Hats off to PJ and Christian for their work. It’s been an incredible ride and I cannot thank everyone enough for their support.”

The Wrench: Scout Bobber Build Off was a nationwide US custom motorcycle contest designed to spotlight non-professional builders who wrench for the passion and not the pay. The program received more than 100 submissions, which were narrowed down to 12 by a judging panel of professional builders and experts, including Roland Sands, Satya Kraus, Jason Paul Michaels and Hot Bike Editor-in-Chief Jordan Mastagni. After a two-week fan vote, Juarez, along with PJ Grakauskas (an OSHA safety inspector from Avon, OH) and Christian Newman (a mechanical engineer from Buffalo, NY) were named the three finalists. All three builds were unveiled on August 5 at the legendary Buffalo Chip during the Sturgis Motorcycle Rally.

“Since the beginning of this program, our goal was to highlight the passion and the craftsmanship of garage builders from around the country,” said Reid Wilson, Senior Director for Indian Motorcycle. “Needless to say, our expectations were vastly exceeded. Fred, Christian and PJ exemplify what this program is all about. And in turn, we hope it motivates and encourages others from around the country.”

All three bikes will tour a variety of US motorcycle shows and events with Indian Motorcycle for the remainder of the year and into 2019. At the conclusion of the tour, each bike will be returned to the builder.