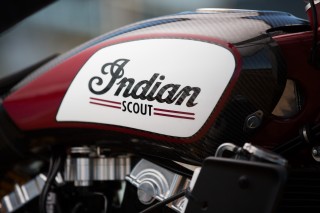 “Since its debut, feedback on the Scout FTR750 has been overwhelmingly positive, with unbelievable interest and demand for the bike,” said Gary Gray, product director for Indian Motorcycle. “The bike’s availability to all race teams will help further establish Indian Motorcycle’s presence in American flat track racing.”

The Scout FTR750 made its official debut during the 2016 season finale, when AMA flat track racing legend Joe Kopp raced it at the Santa Rosa Mile.

Indian’s engineering teams approached the design of the racer as the ultimate combination of modern day technology and elements from Indian’s racing models of the past.

Note that this vehicle is for competition use only and not for recreational or on-road use.