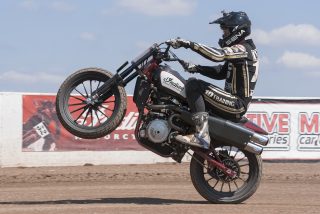 UNITED KINGDOM (August 16, 2018) – Indian Motorcycle returns to DirtQuake this weekend to race in the Hooligan championship decider as well as giving motorcycling celebrities the chance to show their skills in a Celebrity Hot Lap Challenge aboard the Indian Scout FTR750.

Taking place on August 18 at Arena Essex with support from Indian Motorcycle, DirtQuake VII is the inclusive festival of motorcycling that sees professional and amateur riders, plus celebrities from across the world of motorcycling, race flat track for the fun of it. With rare and unique bikes, family activities and star names, DirtQuake attracts a diverse crowd of motorcycle fans to enjoy a weekend centred on the racing which is the heart of the event. Such is the growing popularity of DirtQuake that, for the second year running, the event is being filmed for broadcast on a major UK television network.

With DirtQuake also playing host to the final round of the Dirt Track Riders Association Hooligan series, the Krazy Horse Race Team will be lining up with the four official Indian Motorcycle supported entries: Leah Tokelove, Chris Hatton, Jonathan Falkman and Lee Kirkpatrick. After a win at the previous round and currently third in the standings, Lee Kirkpatrick will be looking to maintain the winning streak to secure a podium position in the championship results. Leah Tokelove will also be challenging for a podium result following her stunning Hooligan class victory at El Rollo during the Wheels and Waves festival in June.

Indian Motorcycle are also adding extra excitement to the weekend by unleashing the American Flat Track Indian Scout FTR750 for a special Celebrity Hot Lap Challenge. Absolutely dominant in the US championship since 2017, with podium finishes in every 2018 round so far, the FTR750 recently secured a second consecutive manufacturer’s championship for Indian Motorcycle. Riders already confirmed for the challenge are superbike champion Neil Hodgson, former Grand Prix rider and motorsport commentator Steve Parrish, and Jenny Tinmouth who is the fastest women ever at the Isle of Man TT.

Watch and embed videos of the Indian Scout Hooligans in action:

Photos by Tom Bing Add All

Photo by Jacqueline @barkingheadsphotography Add All