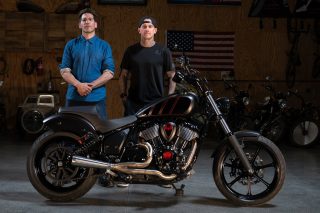 Subtle styling with a focus on handling and performance

As a former freestyle motocross competitor and motorcycle racer, Carey’s builds are inspired from his MX world.

“I love performance, I love going fast, turning fast, and braking hard,” said Carey. “I don’t sacrifice anything on my bikes that are going to jeopardise their handling, how it performs, or my safety. I was really excited to hear about the new Chief when it was announced, that they were sticking to the old aesthetic, you know, dual shocks, triangular steel frame, the stance of the bike, how the bike handles, the power. These 116 motors are no joke, these things run like a champion and the bike really lends itself to customising and making it your own.”

To steer the direction and build the perfect bike, Carey got to know Jon prior to, and during the build so that he could understand his influences and what he’s interested in. The ergonomic setup was also helped by the fact that Jon and Carey are of very similar height and size allowing Carey to size up the riding position himself, “I just wanted him to fit in the bike like a glove,” said Carey.

Jon commented, “I was immediately blown away by how good a guy he is. I knew I was doing this with one of the best in the world. So, it’s just like trusting his expression, getting to know me, what kind of guy I am and the things that are important to me. And that’s what really interested me about this opportunity.”

“There’s so much that excites me about it. The basic setup of it is perfect. Where the handlebars sit, how he’s lifted it a little bit. I wanted it to be kind of exactly what it is. I wanted it to be humble but elegant. I didn’t want the bike to draw too much attention to itself but when you looked at it a little bit closer you realised how special it is. I think it’s beautiful. I can’t imagine a more perfect bike. I can’t believe that I get to ride this thing.”

“To be honest, this is the first time I’ve built a motorcycle for someone else, so it was definitely a little bit of a nail biter.” said Carey. “Seeing his excitement over the motorcycle, seeing his appreciation for the time that me and Big B put in on the motorcycle and just knowing that he’s genuinely, genuinely happy about the bike and that the bike is going to see a lot of road miles, that was just the big payoff for me.”

For more from Jon and Carey, see the videos below. For more details of the two previous Indian Chiefs in the series, see the press releases linked below: